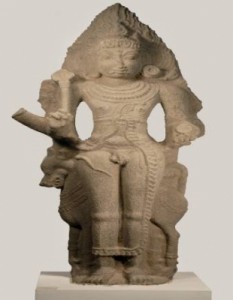 Batuka (youthful) Bhairava is shown here as standing nude, terrific in appearance with protruding fangs. He is four handed and unfortunately his two hands are mutilated away. The remaining two hands hold a trident (trisula) and a skull cup (kapala). His eyes are rolling and round. He is accompanied by a dog. His face discloses a juvenile features. His eyes are guarded by bow shaped eye brows (chaopakaram). His matted hairs are arranged in the form of towering flames and move conically above. He has an ornamental headgear that holds firmly his matted locks and to the left side of his head appears a crescent. Batuka is adorned with a pair of kundalas, a broad band of necklaces, upavita and a udarabandha. He wears a long garland made of human hands. This type of Batuka’s image comes under the category of rajasika type and if this type of image is worshipped then according to Sradatilaka Tantra (Ch.20), he satisfies all desires of his devotees. The image finds description in Vishnudharmittara purana (BK- III ch. 39) and in rupamandana (117-118).