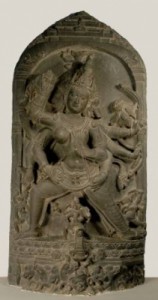 The Buddhist goddess Marichi, is an omanation of the Dhyani Buddha Vaircana. She is shown here as a three headed and eight armed(astabhuja) deity and in this form she is sometimes called Sankshipta Marichi or Marichi Pichuva. She is also known as a dharini goddess – a goddess of protection and a warrior.
The goddess, standing in alidhasana, is found installed within the womb of a chaitya. The pyramidal tower of this shrine has three tiered elevation gradually receding in dimension. One finds in the middle of this superstructure a tiny seated figure of Dhyani Buddha Vaircana in dharmachakra mudra, He is the mentor of goddess Maichi.