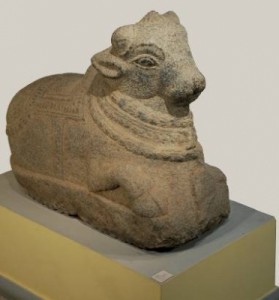 Nandi, the bull mount of Lord Siva is shown seated with its leg folded and placed below its body. It is a humped bull. Its eyes are agitated and ears are mutilated. A head ornament is seen between its two short horns. Three broad ornamental necklaces around its neck are noticed. A designed cloth is seen spread on the back of the bull. Such bull figures are seen arranged on the walls that surround the Dravida vimana (temple) dedicated to Siva.