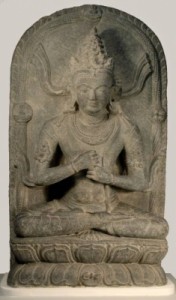 Seated in Vajraparyankasana, the dhyani Buddha Vairocana is displaying with his two hands bodhyange mudra. He is hown seated on a lotus seat and his figure is seen adjusted against a severally plain back stela. The edges of this stela guarded by a broad band of pearl chain and the later was backed up with flamed designs. As he is described in the Nepalese tradition as the master of whole temple, he can not be represented outside the stupa. Honouring this statement, this image is seen adjusted in the silhuette of the back wall of a curvilinear tower.
The crowned Dhyani Budhha is adorned with Kundalas, Keyuras, balayas and nupuras beside a broad necklace and a waist band. He is also endowed with a ratna-upavita. The lower part of the Dhyani Buddha is fully draped while his upper part has been kept arm pits and the end pieces of it flutter at the back of his elbows.